Six years before Merivet Lombera accepted the title of Alianza Youth Leadership Co-Manager at the Latino Community Fund of Washington, she was a student at Yakima Valley College (YVC) interacting with the organization for the first time.

According to Merivet, during her first year of college, YVC’s MEChA (Movimiento Estudiantil Chicano de Aztlán), had invited LCF, among other organizations, to participate in their annual conference. It was LCF’s environmental justice workshop that caught Merivet’s eye. 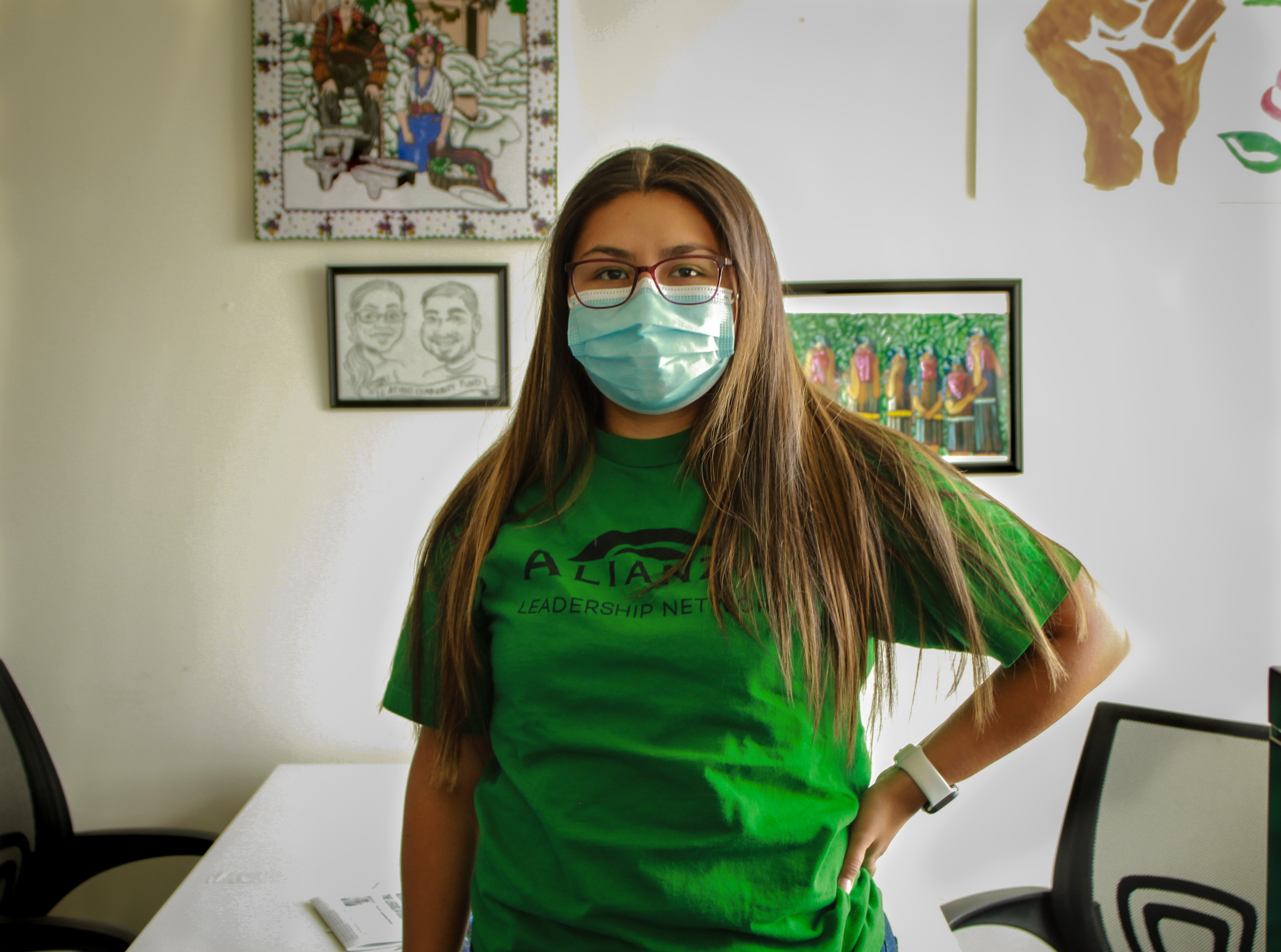 Merivet Lombera, Alianza Leadership Program Co-Manager, stands by her desk in the LCF office in Yakima, Wash. on Friday, August 6, 2021.

Six years before Merivet Lombera accepted the title of Alianza Youth Leadership Co-Manager at the Latino Community Fund of Washington, she was a student at Yakima Valley College (YVC) interacting with the organization for the first time.

According to Merivet, during her first year of college, YVC’s MEChA (Movimiento Estudiantil Chicano de Aztlán), had invited LCF, among other organizations, to participate in their annual conference. It was LCF’s environmental justice workshop that caught Merivet’s eye.

“I became interested and I wanted to learn more about it,” Merivet recalled. “Especially to learn about how the manure lagoons were affecting the Lower Valley water wells. And so I just became involved. Later on, I started doing voter registration and Get Out the Vote as a volunteer.”

Shortly after, the Alianza Leadership Program was developed. The youth engagement program focuses on organizing youth across the state to engage in their communities through a leadership-building curriculum and civic engagement events. An opportunity Merivet immediately jumped on.

After her volunteer work and her time in the Alianza curriculum, Merivet joined LCF as a community organizer where she focused on the passion that brought her to the organization in the first place: environmental justice work.

“I was trying to organize the community around environmental justice. Mostly doing events and educating the community about how the water wells were getting polluted with all the cow manure [in the Lower Valley],” she said.

After so much time dedicated to community organization, Merivet returned to one of the programs that began her journey with Latino Community Fund.

As part of the first Alianza Youth Leadership co-managing team, Merivet’s job involves finding opportunities for youth across the state to become involved with the issues that they care about the most. Additionally, she and Tanya Medina, Alianza’s other co-manager are in charge of evaluating the program and setting goals to ensure that the needs of youth are being met and their voices are being heard.

A big part of ensuring that youth across Washington are being recognized, is by organizing events such as the Alianza Leadership Youth Summit.

The annual conference organized by youth for youth, has been a key part of the Alianza curriculum since its inception. It has provided a gathering place for youth who wish to make an impact in their communities and has provided resources such as workshops and brainstorming sessions to empower youth to do the work they deem necessary.

Merivet has been an integral part of developing and organizing these summits and has been a leading force in coming up with innovative ideas to continue to host the summit during the last two years of the COVID-19 pandemic.

Last year’s summit, “Unidxs en la Lucha” (United in the Struggle) was held over Zoom and featured workshops such as “You and Politics,”  “Intersectionality and Action” with key community leaders such as keynote speaker, Yosimar Reyes, and grassroots organizer Dra. Verónica Vélez.

This year Merivet and her team flipped the script and held the first-ever listening summit in Alianza history.

“Take the Mic” allowed participating youth to lead the conversation and talk about issues that they wanted to address in their community. Among these conversations, youth touched on topics such as climate change, universal health care and providing resources for low-income communities.

One of the topics that has surprised Merivet the most in these conversations is the topic of urban sprawl.

“It's something about a community having houses where there’s big gaps in between your house and your neighbors,” Merivet explained. “So that's been really interesting to me because I didn't even know the term for that.”

Merivet is excited to turn these conversations into opportunities for youth to become more involved with Alianza and their communities.

“My goal, more than anything, is to build youth leadership,” Merivet said. “It's a lot of commitment and investment in the youth and creating that pathway. It's more than just having a Youth Leadership Summit. It's a commitment to them that we are really interested in developing their [leadership] skills.”

About Merivet Lombera: Merivet is a first-generation college graduate from Central Washington University, where she studied Psychology and Communication. She first got involved with Latino Community Fund in 2015 through the Alianza Leadership Program, where she continues to develop youth leadership in Yakima. In her free time, Merivet enjoys running and reading non-fiction books.